Beginning with something I touched on in a recent post about hype. The Mortal Instruments have been getting a lot of it especially with the recent film release leaving spectators and books lovers feeling a bit two sided about whether they liked the film adaption or if it really wasn’t worth the hype it was getting (witnessed first hand…on twitter).

I also found out that because of the HYPE MONSTER a few of you haven’t read either series, or started one not liked it so have never gone near The Infernal Devices because of the all round disappointment the hype monster can create. Plus I’ve noticed a few that stear clear of prequels for reasons, I do not know, maybe because they aren’t as good or just they aren’t your thing. However I want to prove to you that the Infernal Devices is a trilogy that can stand, very proudly, alone away from TMI. Even in an interview with Clare, she states you don’t have to read one before the other that they are “companion series” and “enhance but don’t spoil” and I’d like to point out that I found The Infernal Devices in their own right when I didn’t really know of The Mortal Instruments  and didn’t have a problem grasping the ideas, as they are, although the same ‘type’ of people, completely different. Anyway…to the review! 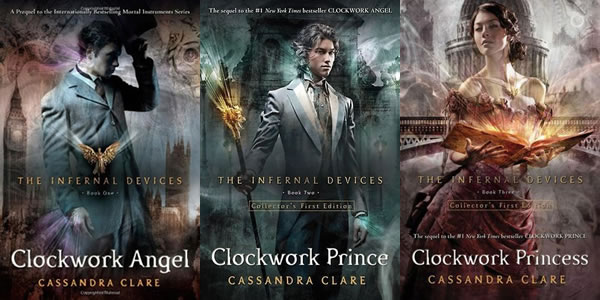 If you have never, ever heard about this trilogy, CLICK HERE to broaden your mind

Lets take a moment to put the hype aside. This is a very good trilogy that I thoroughly enjoyed.

*Side note* Decided to review the trilogy as a whole as it makes it easier for my memory skills,as I have none and I’m new back into blogging, so am allowed a pass for forgetting to review the books just after I’d read them. I’ll get better promise!

Possibly the most important thing you need to know is that during the middle to the end of Clockwork Princess I could not put it down. One night I stayed up until past half 3 in the morning just to finish it, epilogue and all. Must say, I wasn’t disappointed. Some of you may have been more exposed to the Shadowhunter wrath so therefor more affected by the hype, but I’m telling you now, do not be conned into thinking you can’t read either series or if you do your expectations will be ruined.

In all honestly, the first book, Clockwork Angel, dragged ever so slightly. I enjoyed and latched onto the first couple of chapters, forcing myself to read through the spot of dullness to the chapters to follow. Once through that, it was rather good, finding myself already hunting down the second in the series, The Clockwork Prince, before I’d even finished. Speaking of dullness, and yes, I have taken into account that Theresa’s last name is Gray, however the word grey/gray (colour) was used so.many.times I found myself counting them. Which was a bit of a downside to the book and is my only little annoyance on the writing front, the rest was smooth, inviting, lovely and descriptive. 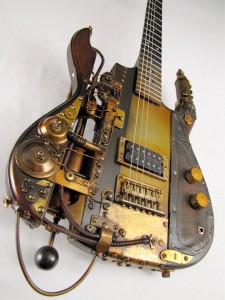 Hey, have a steampunk guitar. Totally fits in with the story!

My favourite, favourite essence of the trilogy was the nod to Steampunk. I’m a fan, definite fan. Love the whole Victorian Clockwork stuff, I even have a Pinterest board dedicated to just Steampunk-esk items and clothing meaning the plot line was utterly up my street. The plot was another aspect I did enjoy, not 100% did I guess the twists (which is scarily a regular occurrence as I completely figured out what was going on in Vera last night. Ruined the evening). Funny thing though, during the ending of Clockwork Princess, I realised I’d been rooting for a certain character to die, which seems cruel, but for a moment I was disappointed in their ending. Until reading the epilogue, I was left feeling rather deflated to how their life would plan out. The character was one of my favourites and felt their calm personality was essential to compliment the other certain characters not so calmness. My best tip to feeling less sad about their life is to be sure to read the epilogue as all makes sense and the world is put to right again.

Overall feeling when I finished the last sentence of the final book was, hmm. A nice hmm, like an aww but mmmm (say it out loud it helps…kind of). It was a satisfying ending and a nice calm way to end a three book adventure journey. Not so keen on cliffhanger endings, as they make me feel incomplete. But this was a nice satisfying feeling, so all is well. I did cry during the last couple of pages as for a month these books were my life (ain’t I sad *uncool*) and don’t we all cry when books that make us feel good end? There were some tear jerking moments though so one is allowed.

All in all, I recommend them. If you’re into a late 19th/early 20th awesome heroine and all round book lover herself, you’ll love Tessa. Oh and The Infernal Devices contained possible the best love triangle situation I’ve read. Forget your Twilight’s or your Hunger Games, this felt like genuine love and each character had a different connection to the other. You wanted them to be together, not cringing at any point. So yes, don’t let the hype get you. Make up your own mind. I did and I liked them, however at no point will I say they were the best trilogy ever and you should stop everything your doing to read them, as they’re not and can wait.

P.S Here’s a really horrible and clunky visual adaption of the series, that will utterly put you off completely or make you laugh at how romanticised and ‘eurgh’ it makes you feel if you’ve read the series (it isn’t like this, promise!)

P.P.S Here’s a quick run down of what songs I listened to during my reading of the three books and thought they complimented it (maybe, it’s a thing I do)

Track 3: Get a Hold of Yourself – Jamie Cullum (I’m a massive Ukulele fan! I actually play ukulele, so for him, as well as being one of my favourite artists, to have written this song on a uke has just made my day. There you go, extra info about me, you totally wanted to know tehe)

Next post: John Green’s ‘The Fault in Our Stars’ will make you audibly sob…

Previous post: Hype, hype, it’s all about the hype!