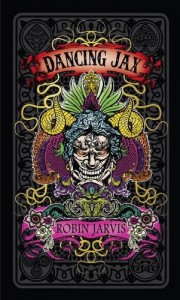 A book within a book: suspense, horror, gripping and the best can’t-put-downer I’ve read in the last year.

Having said that, maybe you shouldn’t read it…

The book within the book is Dancing Jacks; a book so deadly, you should never go near it. Do not even speak of it. Just stay away. If means be, burn it, throw it in a river, anything but do not, whatever you do, open the pages to read it. Written by Austerly Fellows, a mysterious occultist, he will capture your mind and will force you to become a character in his own world of Moon Caster, just by the words on the pages. It may appear a children’s book but once read, you can never get out…

The story tells the tale of a small coastal town, overtaken by a powerful book that hypnotises everyone who reads its words into characters of the kingdom of Moon Caster. Only the last to get captured by such powerful words have the chance to save the town, and better still the world, but will they survive it ‘till the end?

Suspense was too much to handle to be frank; it really left the reader on the edge with massive cliff hangers at the ends of chapters. Once, I think my mum had to pry the book out of my hands so that she could talk to me without me getting too indulged in the book and not listening.

The main feature of the book is that it all has some sort of link to playing cards; every person who enters this abnormal world would be given a playing card. The lower your number, the lower your rank in this royal of worlds. The Hearts and Diamonds seemed to be the good side to the kingdom and the Clubs and Spades were more evil and wicked. But everyone got their role play in the world of Moon Caster depending on the personality they had in real life. It’s fantastically written and I loved how the playing cards had such a big role in the book. It was fascinating.

At the very beginning of the book, I found it challenging to understand. The setting of Moon Caster was in the ‘olden days’ where they have a slightly different way of speaking. Some words were a bit difficult to understand. Therefore at this point asking parents or someone who has more knowledge of the English language is perfectly OK!

Apart from the confusion with a couple of the words this is a brilliant book and I really enjoyed it. I especially liked the modern references, for example; things that have been on TV and the way people speak and jokes made were mostly based on real life modern ways of the world, which, I thought, was amazingly well written into the text. Gave me a chuckle every now at the little details that made is such a brilliant and up-to-date read.

The first couple of chapters although might seem to drag on a tad have some of the key parts for the rest of the story, so it is important to keep reading, otherwise you might not understand and ‘click’ to what is happening later. It soon picks up pace and I found myself unable to put the book down. It was as if a little film was going on in my head and I suddenly found myself experiencing and exploring the words of Robin Jarvis in my head as I were actually there. Fantastic, but scary stuff especially with these sorts of themes.

I’ve never been one for horror, but when I saw this book I desperately wanted to read it. This book has opened my eyes to yet another genre of books, which I’m sure I shall enjoy in the future. However, I must warn you; this is rated 11+. I would maybe rate it a little higher about 12 maybe even 13+ it can get a bit scary at times. Not enough to make you have nightmares but try not to read it last thing before going to sleep…

Although, I appreciate Jarvis is a fantastic writer. I haven’t read anything of his before, but I am sure this will make an everlasting impression.