It’s review time! Been slightly late doing this review as I’ve recently changed hosting providers and there has been some technical problems, but it should all be okay now. Anyhoo, here’s my latest review: 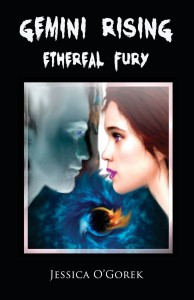 BEWARE! THE PLANET IS WOUNDED… THE GEMINI ARE RISING AND OUR TIME ON EARTH IS LIMITED Angry at the human race and its methodical destruction of her resources, Mother Earth recruits souls who have just left their bodies to serve Her, and turns them against humanity. Gemini, a clan of paranormal beings, picked from these possessed humans, emerges. A powerful, rising force proceeds to carry out Mother Nature’s plan to systematically destroy towns, cities, states… and eventually, the world. Amidst the chaos, a forbidden relationship between a human girl, Violette, and Onyx, a lead Gemini, begins. They will both find themselves in the middle of a revolutionary war that will either save, or destroy our world.

I received the Gemini Rising ebook from Jessica O’Gorek (thank you) who I must say, is a really nice person and you can check out her blog here.

I give you my honest review.

Being painfully honest, I need to make a comment before I start about the front cover. If I saw this sitting on a shelf in a shop, I wouldn’t pick it up. It pictures Violette (right) looking at Onyx, the smoke man (left) and I feel it doesn’t portray the full idea of the book as there is much more than just their relationship. Basically, don’t judge the book by its’ cover!

My first impressions were “Wow, what  a start”. Automatically hated the main character Oliver/Onyx, disliking him so much I was slightly pleased he died. Bit harsh; I know, but the Gemini seem to know what they’re doing, ‘You hurt Mother Nature; we’ll explode your heart’. Seems fair? However I wasn’t so overly keen on the ‘we must destroy the whole human race‘ thing. No, not as fair.

Weirdly, the more I read, the more I despised Onyx, not sure if that’s what O’Gorek was going for, but I definitely felt more uncomfortable and annoyed whenever he was present. Guess I understood his intentions and wanted to root for him – even if he was trying to kill people – but a large part of me felt slightly sick whenever his character was around.

This could be why I wasn’t sure what to make of Onyx’s lust towards Violette. I mean, how old is he again? It’s like the whole “I’ve been living (well dead) for a 100 odd years” Edward and Bella awkward scenario all over again and I just felt queasy. Not that any of this detracts from the main plot and book. Despite the odd feeling throughout, I did really want to know what would happen next.

Right, so Slate. The guy that Violette has liked for ages. Think I’m utterly ‘shipping’ (is that the correct way of saying that, really not in fandoms *awkward*) their thing that’s going on so I’m all for TEAM SLATE. Really against Onyx’s weird, weirdness interfering  and was quite downhearted when the book ended so abruptly with such a cliffhanger (if that wasn’t a big clue, he interfered and then the book ended at the crucial part arrrgh)! Thank goodness there was an extra ‘sneak preview’ of the next book at the end – which I’m utterly grateful for.

All in all, it was an unnerving (by that I mean I was annoyed at the character situations. Imagine me screaming at a kindle and you’ve got pretty much what was happening) but an enjoyable read. If you’re into supernatural romance and general natural magic-ness (that is now a new genre) don’t let the cover or my queasiness put you off, grab this book now! As Jessica says herself, “Want a book with a new paranormal theme? Tired of vamps and wolves? Want something different than angels and demons? Look no further than Onyx…”

Think that round about sums it up.

Brilliant Jessica, I award you with a 7/10 and will be looking forward to the sequel.

P.S Sidenote: How is Colin?! What the absolute heck has happened to him?! WHERE IS COLIN?!

P.P.S I use Grammarly’s grammar correction feature because #yolosymawgygc (you only live once, so you might as well get your grammar correct, correct?)