Close Encounters of the Third Kind, yes, that classic Steven Spielberg movie, I didn’t realise was also a book.

Not sure which came first but either way I throughly enjoyed diving into the film in my brain and reliving a masterpiece of a story all over again. 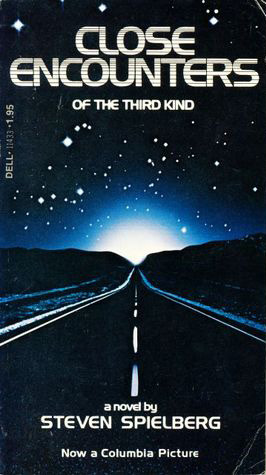 Earth’s greatest adventure had begun. The world was being readied for…Close Encounters of the Third Kind. It meant the beginning of the most dramatic event in the history of the world. It will lead to the inescapable conclusion: WE ARE NOT ALONE

If you’re unaware of the plot this cracking sci-fi story has to offer; it’s about aliens. Weird sightings and odd happenings occur, mostly, across America, where it’s set. We’re introduced to a bunch of different people, from professional alien researchers, to normal ordinary Americans, on their quest to find out what is happening and who they are. I know, that’s a very vague explanation but for good reason as I don’t want to give too much away, and urge you to either read or watch it.

The book is completely accurate to the plot of the film which makes me believe it was published after, or Mr Spielberg stuck very closely to his vision. It was nothing more, nothing less, just a fantastic story, written in such a way that you could imagine it on screen, obviously.

I haven’t seen the movie in a long time, I could only remember snippets of it when I started reading the novel, but having the actors I knew playing the characters in my head helped, surprisingly. In that way it was easy to envisage, the reader delved straight into it, no hesitation. The only thing that makes me believe the book came before the big screen was how little the characters were described, open to multiple different actors, and how Spielberg would have had to have written the plot out in great detail anyway.

Whether you’ve seen the film or not, I highly recommend finding a copy in a second hand book shop, or your gran’s attic. As a sci-fi lover myself, I couldn’t put it down. Just a fantastic classic plot, which I can’t find fault in.